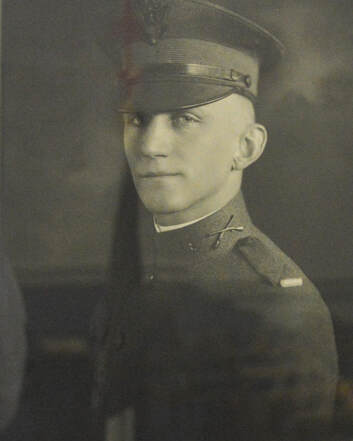 Youngest of nine children of Daniel and Rebecca Moomaw.

Earned BA and MA degrees at the University of Virginia and then entered Washington and Lee University, Lexington, Virginia, where he earned a law degree in 1912. Went on to serve as Acting Professor of Law during the 1912-13 academic year. Named Associate Professsor of Law in 1914. Following the U.S. entry into WWI in April 1917, and although he was beyond the age of the draft and could have claimed conscientious objector status by virtue of his religious belief, he left his promising career to join the Army at age 31. After completing Officers' Training School, he was sent as a 2nd Lieutenant to Europe where he was killed in 1918 while performing reconnaissance in the Bois de Faye region of central France, about 30 km SE of Nevers.

According to various sources of the day, Lt. Moomaw's older brother Benjamin traveled to France in the spring of 1919, located the Lieutenant's remains on the battlefield, and returned them to the United States where they were interred at Fair View Cemetery in Roanoke, Virginia. It can be conjectured that the remains were initially interred in France, marked by the cross shown in the accompanying photo, and then returned to the U. S. in 1921 (Fair View Cemetery records indicate a grave permit was issued to Benjamin Moomaw for the burial of his brother Clovis on September 15, 1921.)

PHOTOGRAPH CREDITS:
Photos of Clovis and his military grave marker at bottom were obtained from and are used with the permission of the Lewis F. Powell Jr. Archives, Washington and Lee University School of Law. http://law.wlu.edu/powellarchives/
Thank you to Mr. John N. Jacob, Special Collections Law Librarian and Archivist, for his assistance.


Following appeared in The Pulaski (Virginia) Southwest Times on October 9, 1920:

TO CLOVIS MOOMAW
---
(Killed in action October 5, 1918, while leading his men against the Germans in the Meuse-Argonne region, France.)
---
It's now two years since iron guns
Stilled your brave heart of youth;
Since you smiled and faced the Huns,
And dying, knew you died for Truth.

Now are returned the fighting ships
To rest again by homeland shore;
But God laid a finger on your lips
And you went West for evermore.

Brave friend, I know I cannot sing
The real tribute that affection knows;
But to your grave today I'd bring
One perfect flower---a white, white, rose.