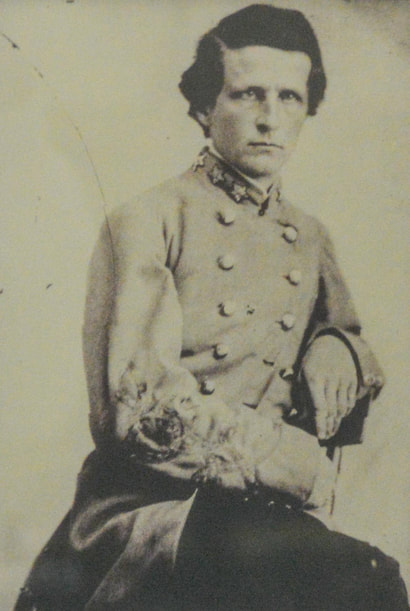 Civil War Confederate Brigadier General. Born at his family's estate, Leeland, in Loudoun City, Virginia, into the Virginia Lee Family, he was a second cousin of Robert E. Lee. He was graduated from William and Mary College, then attended Washington College, (now known as Washington and Lee), where he received his law degree in 1859. His wife was Susan Pendleton, daughter of future Confederate General William N. Pendleton. He entered Confederate service in April 1861 as a 2nd Lieutenant in the 33rd Virginia Infantry. Soon elected 1st Lieutenant, he served as an aide-de-camp to Brigadier General Thomas J. "Stonewall" Jackson during the First Bull Run Campaign. Rejoining the 33rd, which was now a part of the Stonewall Brigade, he rose in rank to Major, then Lieutenant Colonel. He fought in the Shenandoah Valley Campaign of 1862 and in the Seven Days' battles. Promoted to Colonel, he led his regiment at the Battles of Second Bull Run and Antietam. Shortly after Antietam, he was captured while visiting his ill father but was freed in time to fight at Fredericksburg. Shortly after the last engagement, in December 1862, taking his doctor's advice, he resigned because of ill health. But he soon returned to duty, and was commissioned and assigned to Richmond. On May 17, 1864, he was transferred to Staunton, Virginia, where he recruited local troops for the defenses in the Shenandoah Valley. Promoted to Brigadier General on September 23rd of that year, in November, he again left the army for reasons of health. On February 24, 1865, the Confederate Senate rejected his appointment to Brigadier, however he was already on a mission to Canada. He and his wife ran the blockade and settled in Montreal. He remained in Canada until early 1866, dispensing funds to needy Confederates in exile. Returning, he was a witness at the trial of Lincoln assassination accomplice, John Surratt, whom he had known in Montreal. He also looked after the interests of the St. Albans raiders while they were in a Canadian prison. The next few years were spent in an unsuccessful attempt to improve his long-failing health. He died at Yellow Sulphur Springs, Virginia, from a "disease of the lungs."
​
https://www.findagrave.com/memorial/10671/edwin-gray-lee