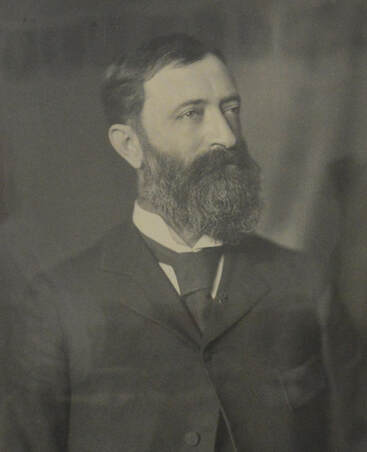 Finley Willson Houston was the older brother of my great grandmother, Lizzie Houston Row. Born September 10, 1852 at Mount Pleasant Farm in Rockbridge County, he was the oldest child of George Houston and Annette Willson. Mount Pleasant was the ancestral home of the Willsons and would become the property of the Houstons after the death of Thomas Willson.

Finley attended school in the nearby village of Fairfield and then was sent to Dr. Pinkerton's Classical School for Boys. He was bright and capable and like his father was accepted for enrollment at Washington and Lee College. Shortly before beginning his studies there, however, Finley was kicked in the head by a horse. His injury was severe enough that he was debilitated for a year. He lost the sight of one eye. Finley never resumed his formal education.

​​​As a young man Finley served at various times as deputy sheriff, deputy treasurer and notary public for Rockbridge County. On October 26, 1875 he married Grace Alexander of nearby Red House farm. Finley and Grace moved in with her mother Ann Eliza Gibson Alexander (Grace's father Dr. John McCluer Alexander had died in 1867). During this time Finley also transferred his church membership from New Providence to Lexington Presbyterian Church.

During these years, in addition to his work with the county, Finley was also in business with his father George Houston. They served as agents for the Aultman and Taylor line of steam and horse powered farm equipment. One of their envelopes was used by Finley's sister Lizzie to keep the flowers from her wedding.

Shortly before his death in 1882 George Houston sold fifteen acres from Mount Pleasant to the Valley Railroad for the construction of the section that ran behind the house. Another one acre was condemned for the building of the Fairfield depot. By 1882 the line was being laid in earnest by railroad contractors Hardin & Young. Serious problems arose when demolition commenced near the house behind the orchard when the contractors began dynamiting the right of way for the track to be laid. On a couple of occasions rocks and other debris whistled through the trees and crashed into the house. Once a rock actually crashed through a window, narrowly missing one of the Houstons' servants. Finley came to Mount Pleasant to meet with a representative of Hardin & Young and demanded that they exercise greater care in their blasting. The contractor rudely told Finley to take up his complaints with the railroad company. Instead, Finley filed a lawsuit on behalf of the Houstons against Hardin & Young. He won.

Finley was appointed Quartermaster of VMI on January 1, 1885. His responsibilities included maintenance and renovation of the school's buildings and provisioning the mess hall. Finley worked in this capacity for seventeen years. He and his family were provided living quarters on campus.

Grace Houston's health became increasingly frail over the years. She suffered from rheumatism and never fully recovered from the birth of Annette. Finley assumed much of the responsibility for raising his daughters. He taught them how to ride, hunt, fish and shoot. Mary became an avid amateur photographer. Although he would never have sons, his girls could provide a boyish level of mischievousness all by themselves. In one episode Annette hatched a conspiracy while visiting Red House with her sisters. She climbed a tree by the house in order to gain access to the room where their grandmother's beautiful old wedding clothes were stored. The girls purloined these clothes and after putting them on engaged in some very unladylike play. They wound up sitting astride the fence, pretending that they were riding horses.

In 1897 Finley and Grace purchased Clifton near Lexington. The house was built in the early 1800s by Grace's Alexander ancestors. Finley raised livestock and also grew cress. The house was located on the North River (now called the Maury). While he was president of Washington College, Robert E. Lee would come here to sit on the porch in order to watch the boat races of his students. A spur of the Valley Railroad ran in front of the house, making it convenient for Finley to ship his produce to market.

In 1902 Finley retired as Quartermaster for VMI and became president of Gazette Publishing, which produced the Lexington Gazette. Not unexpectedly, there frequently appeared in the society column of the newspaper items describing the activities of the Houstons.

All three of Finley's daughters married graduates of Washington and Lee and all three weddings were held at Clifton. The photo above was taken during Annette's wedding on September 7, 1905. Standing behind Finley and Grace are Bruce Houston and her husband William Emrys Davis, Mary Houston, and Ben Harlow and Annette.

Bruce and her husband moved to Kentucky. Annette and Ben Harlow moved to Roswell, New Mexico where Ben was in the publishing business. Mary remained at home with her parents. Grace Houston died August 6, 1907. Mary continued to live with her father for another eight years until she married Americus Frederic White in 1914. They moved to Donora, Pennsylvania where Fred worked in the steel business.

In December 1916 Mary died from complications arising from the birth of her daughter, whom Fred named Mary in her memory. Finley suffered a heart attack and had to give up his work as publisher. He convinced Annette and Ben to return to Lexington and live with him at Clifton. Ben assumed Finley's duties at Gazette Publishing and Annette tended to her father for the rest of his life. He never recovered from his heart ailment or from the death of Mary. In a letter written to my great grandmother in February 1917 he said: "I have been so crushed over Mary's sudden and to me entirely unexpected death I have not been able to talk or write about it."

While his health prevented him from actively engaged in business Finley continued to run his cress farm and served on the Tax Review Board. In 1920 he wrote to his granddaughter Mary in Donora: "You do not know how much we miss you at 'Clifton.' I would just like to pick you up this morning and give you a good hug, then steal a kiss.''

Finley Houston died on Christmas eve 1926. He is buried at Lexington Presbyterian Church.