​​The GMOV to District 20 will be held on the grounds of Mulberry Hill. Located on eight acres in Lexington, Virginia, Mulberry Hill is one of Virginia’s historic manor homes and is placed on both the Virginia Landmarks Register and National Register of Historic Places. Today it is the home of Kappa Alpha Order (known as “KA” or “the Order”) National Administrative Office and the Kappa Alpha Order Educational Foundation.
Register
DOUGLAS VERNON JONES
175TH GRAND MASTER OF MASONS IN VIRGINIA 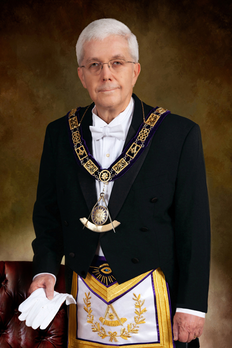 Douglas Vernon Jones was born on October 4, in Richmond, Virginia. He graduated from Deep Creek High School and attended courses at the Kellogg School of Management at Northwestern University and the FBI Academy. He started his professional career with the Federal Bureau of Investigation (FBI) and held several professional support positions in field office operations at the FBI Headquarters and the Columbia, Norfolk and Richmond Divisions and temporary assignments in Tampa, Florida, Jackson, Mississippi and San Juan, Puerto Rico. He was the recipient of numerous awards and recognition and retired in 2010 with thirty-five years of service. Upon his retirement, Brother Jones worked part-time for The Bennett Funeral Homes from 2010 to 2015.

Most Worshipful Brother Jones was made a Master Mason in Metropolitan Lodge No. 11 on April 2, 2002, where he is a Life Member in Perpetuity and served as its Worshipful Master in 2007 and as Treasurer from 2010 to 2014. He is a member of Washington and Henry Lodge No. 344. He was District Deputy Grand Master in Masonic District No. 15A in 2013 and was a recipient of the Grand Master’s Award of Excellence. He was elected Grand Senior Deacon in November 2015 and was elected to the Office of Grand Master in 2019. 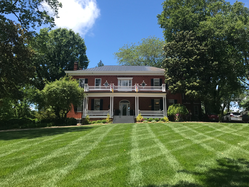 Front Exterior of Mulberry Hill
Mulberry Hill, a five-bay, two-story brick dwelling with a four-room, double pile, central passage plan, contains outstanding examples of late Georgian interior woodwork and represents at least four different building periods that range from the late 18th to the early 20th century. One of the great manor houses of the region, it is scenically sited on a ridge and surrounded by nearly eight acres of rolling lawns and trees. Mulberry Hill evolved from a 36’ by 37’ stone plantation house (circa 1777) to a 36’ by 63’ brick, story and a half manor house. The house was enlarged to a two-story gable roof design just prior to the Civil War. Subsequent owners gave it today’s appearance without changing the original rooms, each of which contains a fireplace.

Rev. William Graham, a Presbyterian minister and rector of Liberty Hall Academy (the predecessor of Washington & Lee University), built the original plantation house. Rev. Graham was a Princeton University classmate and friend of Henry “Light Horse Harry” Lee of Revolutionary War fame and the father of Robert E. Lee. Harry Lee attributed his graduation from Princeton to Rev. Graham because he allowed Harry to study with him. Rev. Graham is buried on the Washington & Lee campus, adjacent to Lee Chapel. 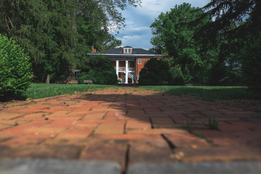 Formal Gardens of Mulberry Hill
Mulberry Hill was purchased in 1797 by Andrew Reid, the first clerk of court in Rockbridge County, who built a one-story, double-pile brick house. Reid later left the home to his son, Samuel Reid, who was the county’s second clerk of court. The younger Reid was a senior trustee of Washington College for 50 years, a founder of The Franklin Society and a colonel in the militia.

On September 18, 1865, Robert E. Lee arrived at Mulberry Hill as a guest of Col. Reid to begin the preparations for assuming the presidency of Washington College and to meet with the trustees of the College. Lee would spend four nights at Mulberry Hill in the days prior to his inauguration as president of the College. From 1931 until the purchase by the Kappa Alpha Order Educational Foundation, Mulberry Hill was owned by the Tyree/Grigsby family. The KAOEF purchased the property from Mr. and Mrs. Lewis Tyree Jr., who purchased the property from his mother and father. Mulberry Hill is a Virginia Historic Landmark, listed on the National Register of Historic Places in 1982 and subject to a historic preservation easement to the Commonwealth of Virginia.