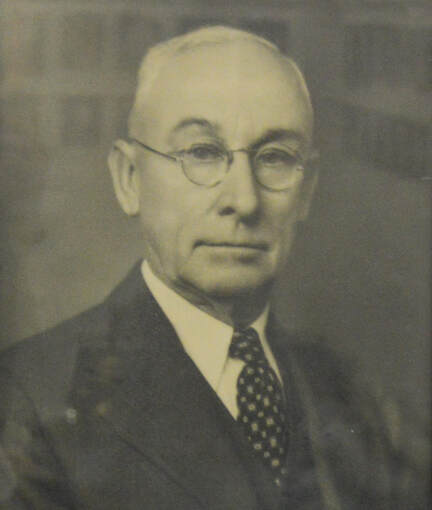 “I don’t know why I am here but the Lord was with me. He took people I could reach out and touch. I don’t know why he left me.”
These were the remarks made Friday night by J. Harris Thompson of Lexington as he told of being among the seven survivors when a speeding Southern Railway Train, No. 97, ran off the tracks in Danville on Sept. 27, 1903, killing eleven of the 18 persons aboard.

Ready to Deboard
Mr. Thompson reported that he already had put on his hat and coat in preparation for leaving the train in DAnville, when the tragedy occurred about 2:40 p. m. in what was then known as North Danville, just across the river from the city.

The survivor told of events concerning the mishap while in Staunton Thursday, Friday, and Saturday attending the 137th Grand Conclave of the Grand Commandery Knights of Templar.

Relating that the train, sometimes referred to as “Old 97” carried only mail and express cars, he said: “It would have been murder had there been passengeres,” At the tiem, the train consisted of an engine, three man cars, and an express car.

Killed instantly in the mishap when the train failed to negotiate a curve and plunged off a trestle into a hollow about 75 feet below were the engineer, two oremen(sp?), an express man, and four postal clerks. A fifth postal clerk died nine days later as a result of injuries received.

One of the postal clerks himself, Mr. Thompson, said there was no doubt but that the accident was caused by excessive speed. He reported the train was going too fast to negotiate a curve at the bridge. The 80-year-old survivor estimated the train was travelling between 60 and 70 miles per hour at the time of the wreck. It was on its way from Washington to New Orleans.

Mr. Thopson, who was 24 at the time of the accident, reported that “there were three of us (postal clerks) in the back of the final car. Two were killed.”

Referring further to the events he said he had just put on his coat and he was to get off the train in about five minutes when the mishap occurred. “The man behind me was putting his coat and hat on. He was killed instantly.”

According to Mr. Thompson, the two in the car with him who were killed were probably struck in the back of the head by some object.

Relating that he was unconscious for a short time, he said he came to and found himself on top of the car in which he had been riding. “Another man helped me out of the wreck.”

The survivor suffered a dislocated hip and lacerations of his entire body. He was confirmed to what was then known as the Danville Hospital for about nine months.

The other two surviving postal clerks are M. C. Maupin, Charlottesville, who received only slight injury, and J. J. Dunlap, Washington, the only person who didn't receive a scratch, said Mr. Thompson.


Birds Escape
Also on the train at that time of the accident were several crates of canaries. They were not injured and ironically began flying about the wreckage singing sid the former postal clerk.

The accident was termed one of the most tragic of that period because of the large percentage of people killed.

Since the date of the accident, an iron marker has been erected at the site. “I believe it is the only one in the United State depicting the scene of a train wreck,” he observed.

It was impossible to place an estimate on the damages incurred in the mishap, added Mr Thompson. The engine was rebuilt afterwards but all cars were so heavily damaged that they had to be junked.

Fire broke out at the scene immediately following the wreck, but was quickly extinguished he reported.

The survivor, who now makes his home at 314 Jackson Ave., Lexington, said concerning the mishap, “It is something I will never forget. It will be impossible to forget.” He has returned to the scene many times.

Mr. Thompson retired from the Railway Mail Service about 18 years ago. He has been married to the former Miss Nettie Hottell formerly of Woodstock, for about 55 years.

Commenting on the fact that a song entitled “Wreck of the Old 97” was written only a short time after the mishap, he reported it is not known who the author was although many have claimed the distinction.
​
https://www.newspapers.com/clip/16400016/1959-j-harris-thompson-remembers-the/ 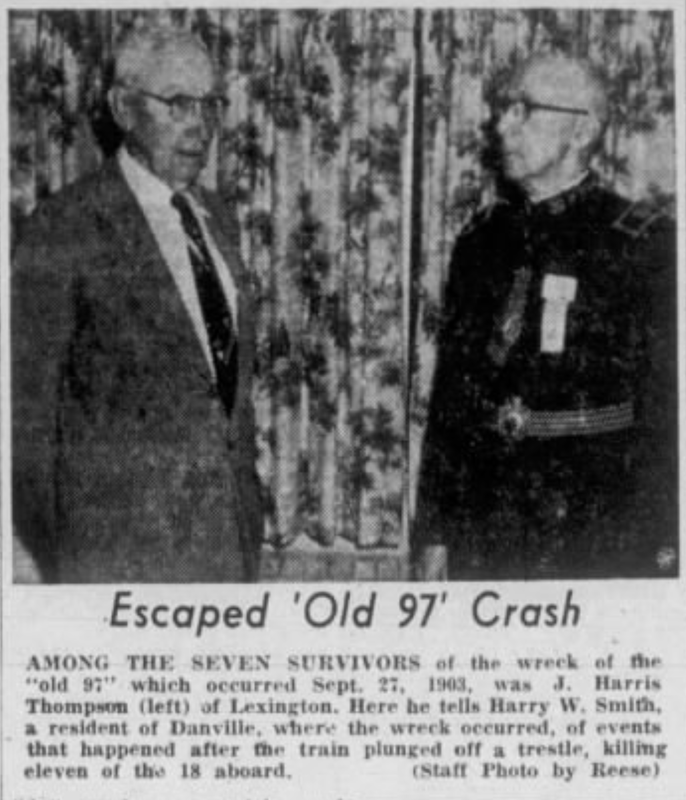