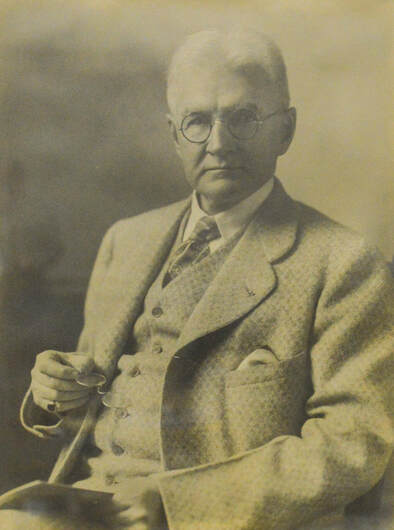 “James Lewis Howe was for many years Professor of Chemistry and Head of the Department at Washington and Lee University. As one of the most distinguished chemists in the Blue Ridge Section, we have chosen to name our annual awards to outstanding students in his memory.

Howe was born in Newburyport, Massachusetts in 1859; this is the same year in which Svante Arrhenius was born, and during Howe's professional career he was to know many of the famous early chemists, such as Liebig, Wohler, Bunsen, and many others. He attended Amherst College, where he pursued his favorite subjects of chemistry, German, and religion. He was selected to deliver the graduation address on the subject of "The Scientific Method and Religion".

Howe earned his M.S. and Ph.D. degrees at the University of Gottingen, and published his first scientific papers on the subject of aromatic carbon chemistry. He then began an intensive literature search of the platinum metals, beginning a bibliography for which he was to become world famous. He decided that the most interesting and least known metal of the group was ruthenium.

In 1883 How married Henrietta Leavenworth Marvine of Scranton, Pennsylvania. This marked the beginning of a marriage of 60 years duration. The Howes became the parents of two daughters and a son (who was also a chemist). After Mrs. Howe's death in 1944, one of his daughters, Guendolen Howe, became her father's constant companion.

Dr. Howe's teaching career began at Brooks Military Academy in Cleveland, Ohio. From there he went to Central University in Richmond, Kentucky, where he was Professor of Chemistry (and later Physics and Geology as well). In 1894 he accepted the Chair of Chemistry at Washington and Lee University, and for almost half a century he was at that institution.

It was at W&L that Howe began his intensive bibliographic study of the platinum group and his outstanding research on the element ruthenium. In 1917 he was appointed chairman of a special subcommittee on platinum of the National Research Council. His work led to the development of platinum alloys, and averted a potentially crucial shortage in platinum, threatening our efforts during World War I. He later received several presidential commissions dealing with the platinum metals.

Dr. Howe was beloved by his students and colleagues at W&L. For the first fifteen years he was a one person department. His lectures were informal, but completely up to date. He was known for his extreme congeniality, charming personality, mild manner, and even temper. He was unceasingly helpful, and believed that more could be learned in the laboratory than from lectures. Dr. Howe's unflagging energy found him serving in many capacities outside the scientific field. He was an Elder of the Lexington Presbyterian Church, an active Mason, and held positions in the Town Council in Lexington and the People's National Bank of Lexington.”
http://acs-vbrs.org/newsletter/BRCApr18.pdf

“Dr. James Lewis Howe, professor of Chemistry in Washington and Lee University, delivered on of the most interesting lectures to the Teacher’s Club last night in Westminster churche ever heard in the city. A large cultivated audience was in attendance, and not a word that fell from the speaker’s lips was lost.

It will be remembered that Professor Howe was once engaged by the City Council to examine the water supply of Lynchburg, which fact lent a particular interest to his utterances, especially those in regard to James river and also to the new supply from Pedler river. The Teachers’ Club is deserving of thanks fo the people of the city for bringing such a distinguished scientist to Lynchburg and throwing his lecture open free of cost to all persons.” - Lexington Gazette - May 2, 1906

“The following additional officers have been elected by the congregation of the Lexington Presbyterian Church and the same will be formally ordained next sunday by the pastor Rev. Dr. Thornton Whaling: Elder. Prof. Addison Hoque, of Washington and Lee University; Deacons, Capt. H. E. Hyatt, of Virginia Military Institute; Dr. James Lewis Howe, of Washington and Lee University, and Mr. J. W. McClung. - Lexington Gazette - November 20, 1901