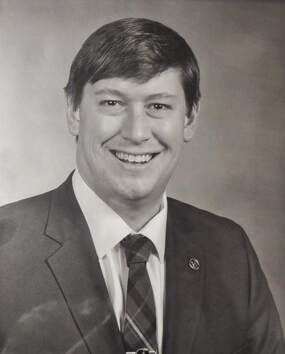 R.W. Jesse S. Lyons was born on March 8, 1979 in Franklin, North Carolina to Wayford and Elaine Lyons. He graduated from Franklin High School in 1997, and is an Eagle Scout. He received his Bachelor of Science in Business Administration from Western Carolina University, where he served as SGA President, and president of the Delta Alpha Chapter of Kappa Alpha Order national fraternity.

In 2002, he graduated and moved to Lexington, Virginia to work for the Kappa Alpha Order National Administrative Office. Joining staff in June 2002, R.W. Lyons first served as an Educational & Leadership Consultant and has held several positions since. In his tenure he started 23 Active Chapters, and assisted in starting seven more provisional chapters. Today, he is the Assistant Executive Director for Advancement and Editor of The Kappa Alpha Journal, and is responsible for the Order’s comprehensive communications, public relations, media relations, licensing, information technology, and marketing efforts. He supervises the Director of Communications, and assists the Kappa Alpha Order Educational Foundation’s communications efforts. R.W. Lyons also assists with the archivist and archives operations, and supervises the building and grounds of the National Administrative Office at Mulberry Hill. He is the recipient of the Knight Commander’s Accolade, the highest award an alumnus may receive for leadership and service to the Order.

In his professional capacity, he was elected to the national Board of Directors of the Fraternity Communications Association in 2012. He served two terms as President and received FCA’s Marilyn Simpson Ford Distinguished Service Award in 2018. He has been a member of the Fraternity Executives Association since 2004. Locally, he served in several capacities with the Lexington-Rockbridge Jaycees, including four years as President. In 2018 he was made a Life Member of the Virginia Jaycees. Additionally, he has served as the Chairman of the Rockbridge Community Festival and the Chamber of Commerce’s Rockbridge Beer and Wine Festival.

R.W. Lyons was elected to receive the degrees in Freemasonry by Mountain City Lodge No. 67 and was initiated as an Entered Apprentice there on May 18, 2010. He was passed to the degree of Fellowcraft by Magnolia Lodge No. 53, Grand Lodge, F.A.A.M., of the District of Columbia, in the Friendship Odd Fellows Lodge in Washington, D.C. on June 26, 2010, as a courtesy. He was raised to the sublime degree of Master Mason on September 25, 2010, by Magnolia Lodge, as a courtesy, in Fredericksburg Lodge No. 4, the location of George Washington’s Mother Lodge. Magnolia Lodge is an affinity Masonic Lodge for members of Kappa Alpha Order. He served as Worshipful Master of Mountain City Lodge in 2016. He was elected the Lodge Secretary in December 2018 and continues in that role. He was appointed as the District Deputy Grand Master for the 20th Masonic District by Most Worshipful Douglas V. Jones to serve in 2020, and continued in that role into 2021.

He was exalted to the Most Sublime Degree of Royal Arch by Rockbridge Chapter No. 44, Royal Arch Masons in Virginia during a Degree Festival at Mountain City Lodge. He became High Priest on September 19, 2016 and continues in that position. He became a member of Moomaw Commander No. 27, Grand Commandery of Knights Templar in Virginia, on June 18, 2011. He was elected Commander on March 20, 2017, and continues in that position.

He is married to the former Tracy Ann Elleard, and they have two children, Annalee Estelle and Samford Walker. They live in Lexington, Virginia.