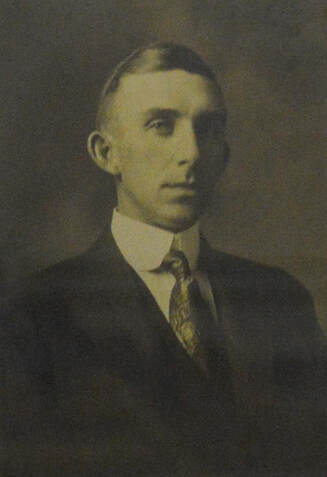 MAYOR OTHO C. JACKSON DIED UNEXPECTEDLY THIS MORNING
Mayor Ortho Charlton Jackson died at 10:30 o'clock this morning at his home on Nelson street. He first became seriously ill during the night, and the news of his death was heard everywhere with surprise and with many expressions of grief. He died of heart failure from a system poisoned by influenza with which he became ill last Friday. While quite sick, his illness was never recognized as alarming and his condition at bedtime last night was considered altogether favorable to his early recovery.

Otho Carlton Jackson was a native of Lexington where he was born Nov. 26, 1885, a son of John A. Jackson and Nannie J. Carlton his wife, respected and beloved residents of the community. He was educated at the Lexington schools and at Washington and Lee University where he was graduated with both the degrees of Bachelor of Arts and Bachelor of Law. The latter degree was received in 1910 and he then began the practice of law in Lexington which he continued actively up to the date of his illness. In June 1913 he was elected mayor of Lexington receiving a very handsome vote and was re-elected by complimentary majorities at the next three succeeding elections. His popularity as an official and citizen was shown by his continuance in office. As a lawyer he built up a substantial practice and proved himself a capable advocate at the bar. The gifts of a speaker were shown by him when on occasions as mayor of Lexington he was called on officially at public gatherings.

He was a member of Trinity Methodist church, a teacher of a large Bible class in its Sunday school, and a man of exemplary life.