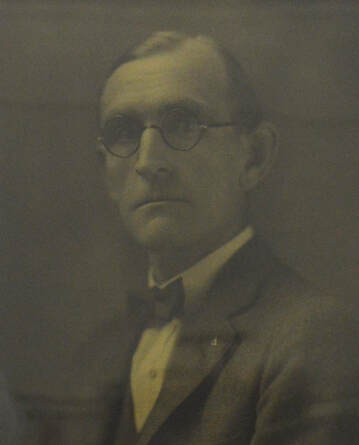 W. Horace Lackey, 79, who served for many years as secretary-treasurer of Myers Hardware Company died at his Lexington home on Jefferson Street after an extended illness. He was one of Lexington’s most universally respected and beloved citizens. Mr. Lackey was born near Timber Ridge in Rockbridge County. At the age of 19 he had just graduated in 1900 from Dunsmore Business College when the position of bookkeeper at Myers Hardware became available and he took the job. He celebrated his 60th anniversary with the business May 12, 1960.
Founded in 1865 as H.H. Myers & Sons by the late Henry H. Myers, the firm has been in business continuously, at the same Main street stand for 95 years. During that time it has had only five active managers, H.H. Myers, Nelson Myers, S.M. Dunlap, Mr. Lackey and S.M. Dunlap, Jr.
A main interest with Mr. Lackey was the A.T. Graham Bible Class at the Lexington Presbyterian Church. Following the late Harvey Wise, who first taught the class, he continued as its teacher for 33 years. In 1952 the name of the class was changed to the Horace Lackey Bible Class.
Mr. Lackey was elected a deacon in the church in 1911 and became in 1923 an elder, an office he held until his death. He was the senior member of the session from point of length of service.
His leadership in the Masonic Lodges was also outstanding. He was a past master of Mountain City Lodge 67, AF & AM, past high priest of Rockbridge Royal Arch Chapter No. 44 and past commander of Moomaw Commandery, No. 27, Knights Templar. He was also a member of Kazim Shrine Temple in Roanoke.
He was a charter member of the Lexington Kiwanis Club.
Mr. Lackey became an early fly fishing enthusiast and in recent years his jeep could be seen with motor boat on top, headed for the bank of some stream.
An outstanding characteristic was his generosity to all worthy causes that made a canvasser’s visit to him a pleasure. He spent a great deal of his spare time visiting the sick and unfortunate.
Excerpt from his obituary, “Horace Lackey, Church Leader, Dies at Home,” Rockbridge County News, Lexington, Virginia, Nov. 3, 1960.