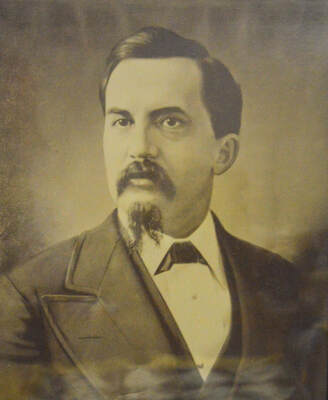 Before Sharpsburg
While a student he was among the VMI Cadets and Staff at the execution of John Brown in November 1859. He was at the University of Virgina Law school into 1861, served as aide to Virginia Governor Letcher, and was with the UVa Company at Harpers Ferry in April 1861. He then obtained a commission in the Provisional Army of Virginia as 1st Lieutenant of Engineers dated 1 May 1861. He was at Yorktown May - July 1861. He resigned because PAV officers were not accepted for Confederate service and had been unpaid. He sought and got a commission as 1st Lieutenant, Confederate States Army (CSA) in August 1861 and was assigned to Company E, 1st Virginia Battalion in October. He was detailed to recruiting duty in February and March 1862 and promoted Captain on 14 August 1862.

On the Campaign
He commanded the Battalion on the Maryland Campaign.

The rest of the War
He was assigned to duty with the Provost Marshall as Commander, Army of Northern Virginia military prisons November 1864 - February 1865, and surrendered at Appomattox on 9 April.


After the War
After the War he practiced Law, was a member of the Lexington Town Council, a bank director, and a real estate agent. He was an organizing member of the Lee Memorial Association (Secretary 1870-79) and a Mason. He died at the sanitarium in Clifton Springs, New York known for it's sulphur springs therapy - just 39 years of age.

References & notes
Details above from Driver1 and the VMI Archives2, also the source of a photo c. 1870. The photograph used on this page is of unknown source, and found in Driver's Regimental.