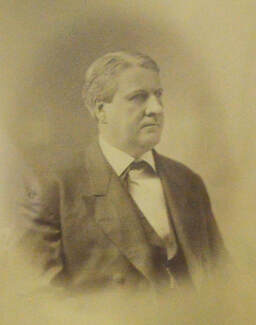 William McLaughlin was born 6 January 1828 in Rockbridge County, Virginia, to Edward Irving McLaughlin (d. 1858) and Betsy Nesbit McLaughlin (1792-1869). He apprenticed as a surveyor with his father, but became interested in the law. McLaughlin graduated from Washington College in 1850, then studied law under Judge John White Brockenbrough (1806-1877). McLaughlin was admitted to the bar in 1851, but continued his studies for two years before commencing his practice in Lexington, Virginia, in 1853.
​
When the Civil War began, McLaughlin enlisted in the Rockbridge Artillery and served through out the war, rising to the rank of major. After the war ended, McLaughlin returned to Lexington where he was appointed to the board of trustees for Washington College. McLaughlin suggested that the school hire Robert E. Lee (1807-1870) to be its president and after Lee's death, pushed for the school to be renamed Washington and Lee University. He represented Rockbridge County in the constitutional convention of 1867-1868 and in the House of Delegates in 1869. McLaughlin was appointed judge for the 13th judicial circuit in 1870. He married first Sallie Mayse (d. 1882) 30 November 1875, and married second Fannie M. Coffman. McLaughlin died in Lexington 18 August 1898.
​
https://www.werelate.org/wiki/Person:William_McLaughlin_(22)